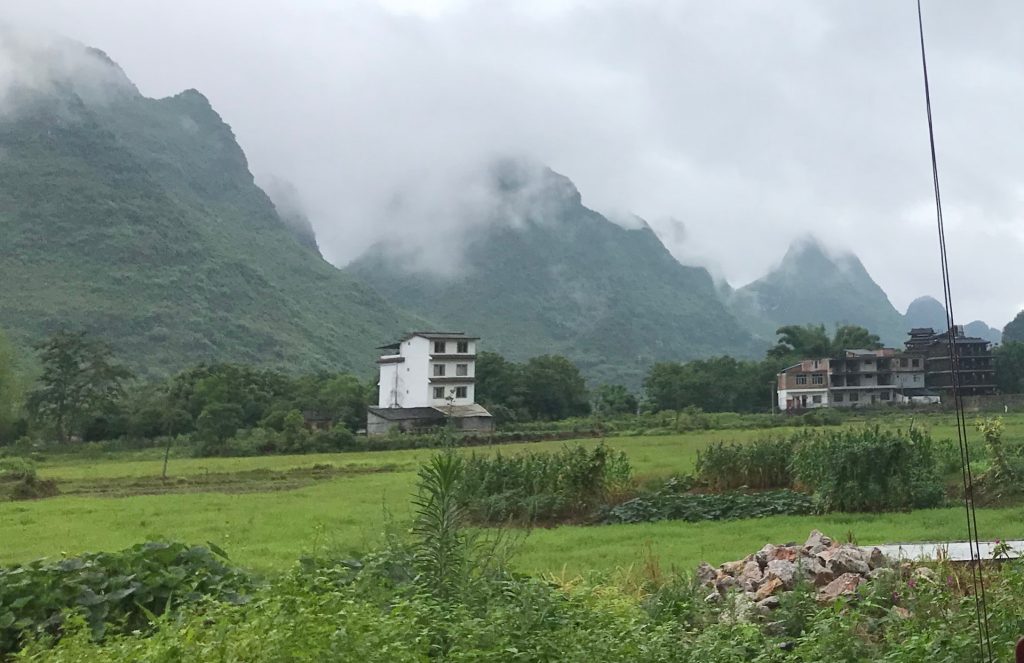 Did I hear you ask “ why on earth would you want to ride a bicycle in China?” Well, I love a challenge and an experience! Yangshuo is a beautiful place, known for its dramatic and stunning karst formation and landscape. Exploring the local countryside by bike seemed like a good idea at the time. Cycling through the stunning landscape was very appealing to me. The tour offered biking at a leisurely pace with plenty of stops to hydrate and appreciate the scenery. The bike ride ended at MoonHill, one of the famous attractions in the area. What could possibly go wrong?

In order not to take any chances and to be on the safe side, I brought my own helmet all the way from U.K and carried it throughout the trip until the time of the bike ride. What I had not appreciated was that I would stand out like a sore thumb. The Chinese do not wear a helmet so anyone wearing a helmet of any kind must be a foreigner.

As you can see, I am all dressed up in the right gear, and ready to explore. Everyone was excited and after a brief introduction from the lead bike rider – local Chinese man who knew the area like the back of his hand, we set off.  The lead guide explained that  we would have to ride through the busy roads in the city centre for about 10 minutes before reaching the edge of the countryside that is a lot quieter.

Now this is where I make a confession – I had not ridden a bike properly for a very long, long time!  But I felt confident that I could do it. I relied on the old saying “it’s like riding a bicycle, you never forget”.  Hearing my shocking news, our tour guide decided to ride next to me to give me some confidence. Big mistake! We had ridden less than ten minutes – the gate to the country lane in sight – when disaster struck! I fell off my bike and pulled our tour guide down with me, just missing the wheels of the lorry desperate to overtake me. To be honest, it was not my fault. I blame the lorry driver behind me who hooted several times because he was impatient. And of course it was obvious that I was not from round there, not least because I was wearing a helmet!  I was badly shaken and sustained bruises around my knee but luckily nothing serious.  I was naturally unable to continue with the ride and had to – guess what – ride back to base on the same busy road!!! I was a nervous wreck by the time I reached the starting point. I think I was more embarrassed than anything else. I had several cups of tea to calm me down!

Everyone in the group knew how much I had looked forward to the bike ride and about carrying my helmet all the way from the U.K. I carried my helmet back to the U.K. with me again!

The good news is that all my fellow travellers who did the bike ride had the most amazing ride and they were glad they did it. Just to add, all of them were very good and experienced cyclists.

2 Replies to “Biking in Yangshuo”