My trip to Argentina was filled with memorable experiences. To start with, Argentina is famous for a number of things. Yes you guessed right – football, tango, steak, wine, natural wonder – Iguazu Falls and of course Evita – “Don’t  cry for me Argentina”. And I  experienced them all!

Argentina is the second largest country in South America after Brazil. Its capital, Buenos Aires, was my first stop.  I stayed very close to the city centre – Plaza de Mayo – where their famous presidential palace, Casa Rosada, locally known as the Pink House, is located. I felt safe exploring the area and I was fascinated by the architecture with its colonial and french influences.

Like its neighbour Brazil, Argentineans are patriotic and they are crazy about football. And as the country is gripped with the forthcoming 2022 World Cup, football  was all talked about a lot and the  Argentinean flag, the unmissable white and blue stripes, was seen everywhere even in the most unusual places!

One of the highlights of my visit to Buenos Aires was attending a tango show. I had the most amazing time.The music, the skill of the dancers with their fast foot work, sexy movements were a joy to watch.  I was surprised by the grand finale where one of the performers sang the famous song about Eva Peron – made famous as Evit- “Dont cry for me Argentina”. It was very moving. Wow! what a night!  Even more surprising and somewhat amusing was seeing several waiters around the hall, waving the Argentinean flag to mark the end of the show.

The show included dinner and wine. The steak was absolutely delicious – one of the best sirloin steaks I had in Argentina.  It was awesome! Argentina is of course famous for its beef. And they are one of the top beef eating countries in the world.

I did a guided city tour which took in the picturesque district of La Boca, the Obelisk, La Recoleta cemetery. the neighbourhood of Palemo, the largest in the city, and the famous Playa de Mayo where the presidential palace is situated. The  city sight seeing tour gave me an overview of the landmarks and monuments of the city that I could explore further on my own.

Going on a city tour in Buenos Aires like I did will most certainly take you to this famous street in La Boca  called Caminito. The area is close to Boca Juniors – “La Bombonera” stadium. The colourful painted houses on the pedestrianised  street are interesting but there was not much to do or see once you have walked to the end of this short street. The area is small and it  is dominated by  tango dancers who would approach you to take photos with them, for a fee of course.  The dancers were friendly and not pushy but one must still be careful. Tourism brings in much needed cash for the local shops and eateries hence it is being promoted as a tourist attraction. 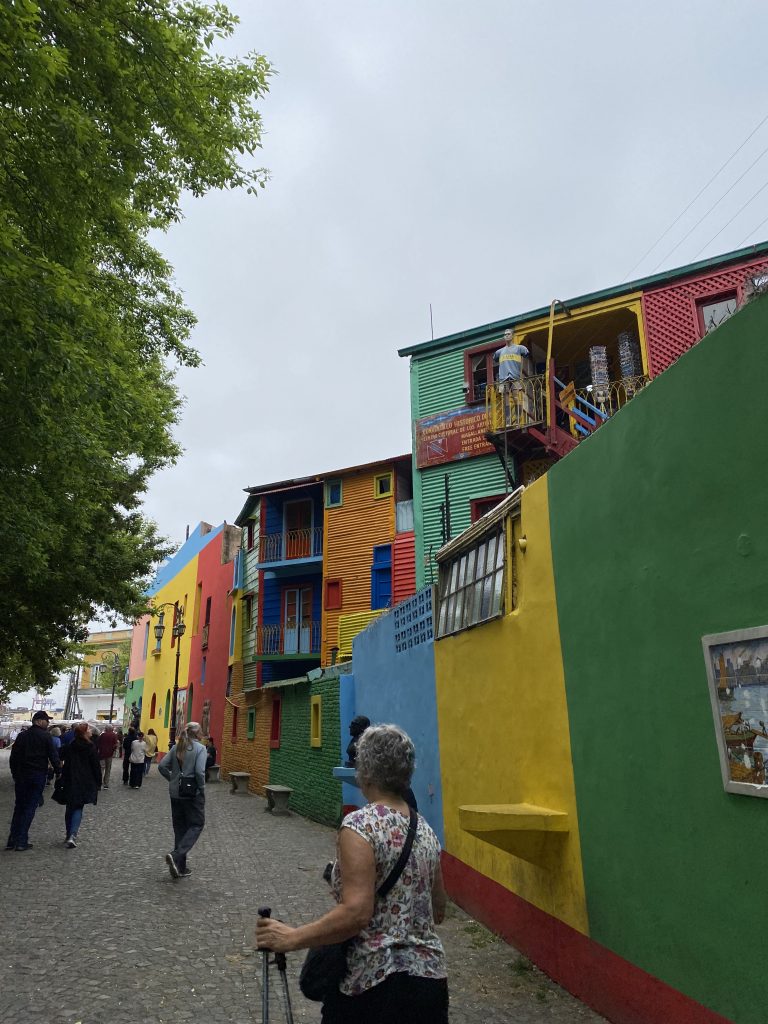 When you look at this building, you will not immediately guess that it is a church. It looks like a greek temple. The twelve Neo- Classical columns at the front of the building represent the twelve apostles of Christ.  In fact, this building is the Metropolitan Cathedral, the main catholic church in Buenos Aires overlooking the Plaza de Mayo where Pope Francis led the mass when he was the Archbishop before becoming the Pope of the Roman Catholic Church.

I decided to explore this Greek Temple looking building further and noticed a band matching into the Cathedral, followed by a huge number of people taking videos and photos. I followed them in, though I was not quite sure what it was all about. It was the changing of the guards that protect the mausoleum of General San Martin and the tomb of the unknown solider!  Three female figures, representing Argentina, Chile and Peru, guard the black sarcophagh representing the regions freed by the General. It was most fascinating to watch. 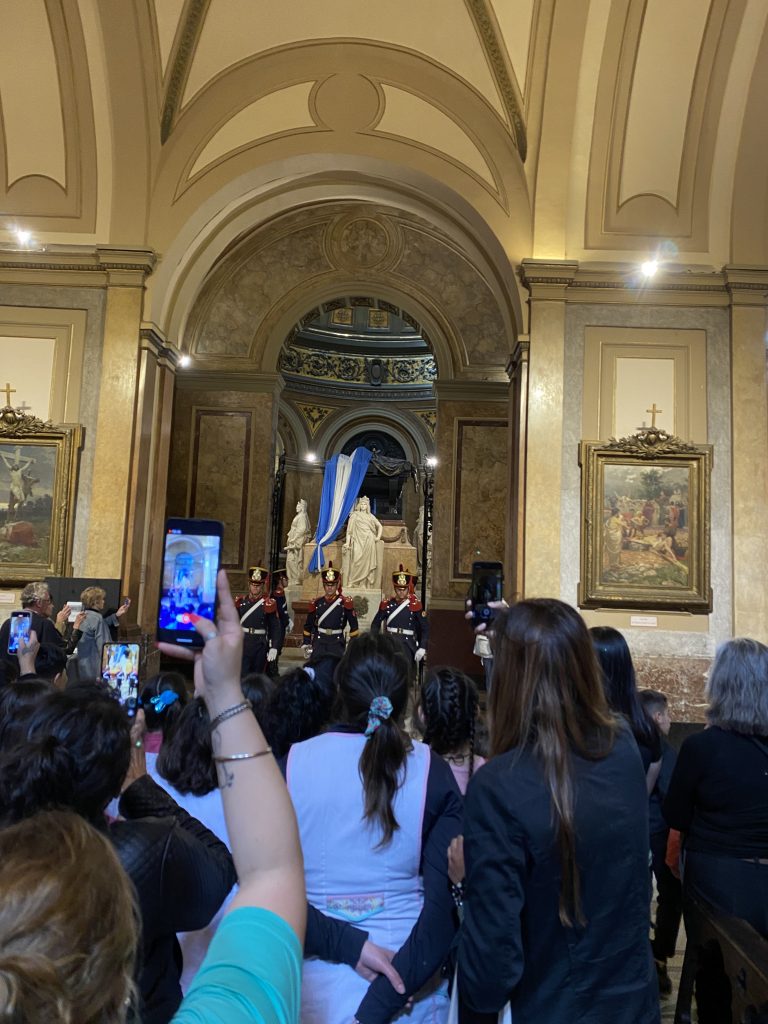 The receptionist at the hotel I stayed in recommended that I visited the Galerias Pacifico.   And that I won’t be disappointed. I was intrigued so I visited it . The Galerias Pacifico is one of Buenos Aires’ upscale shopping centres on Calle Florida, a pedestrians only shopping street.  The building is indeed beautiful and the frescoes are magnificent. 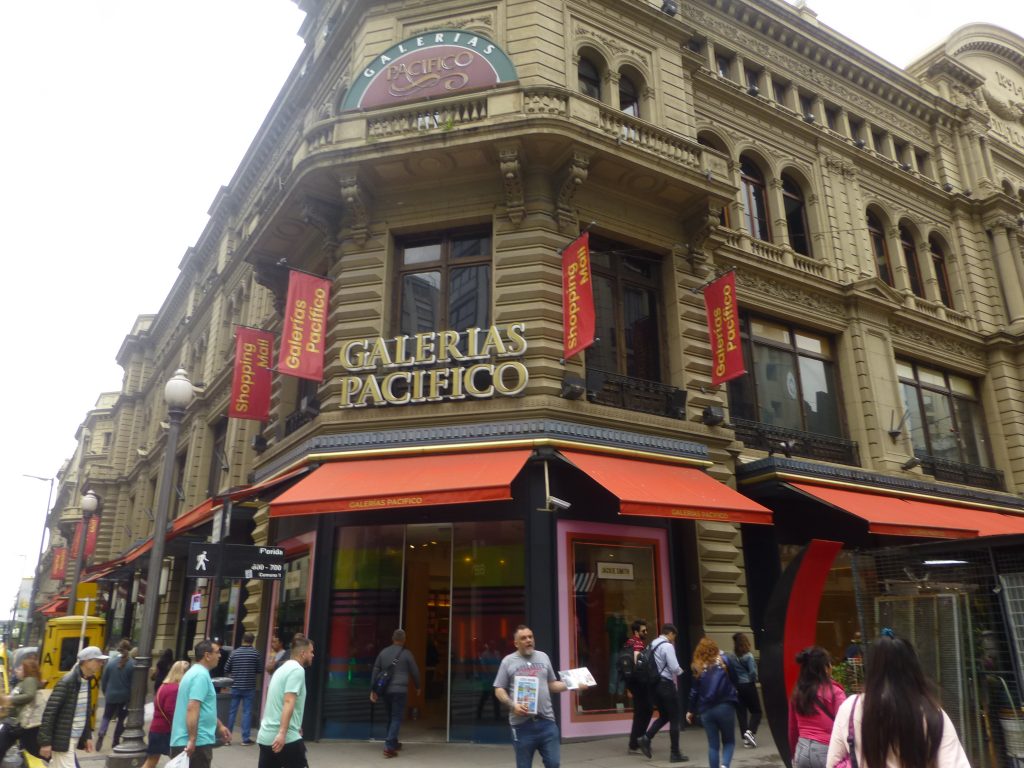 The ceiling of the central dome was painted in 1946  by five renowned muralists and painters. The murals depict a number of universal messages, allegories and situations. They are simply stunning. 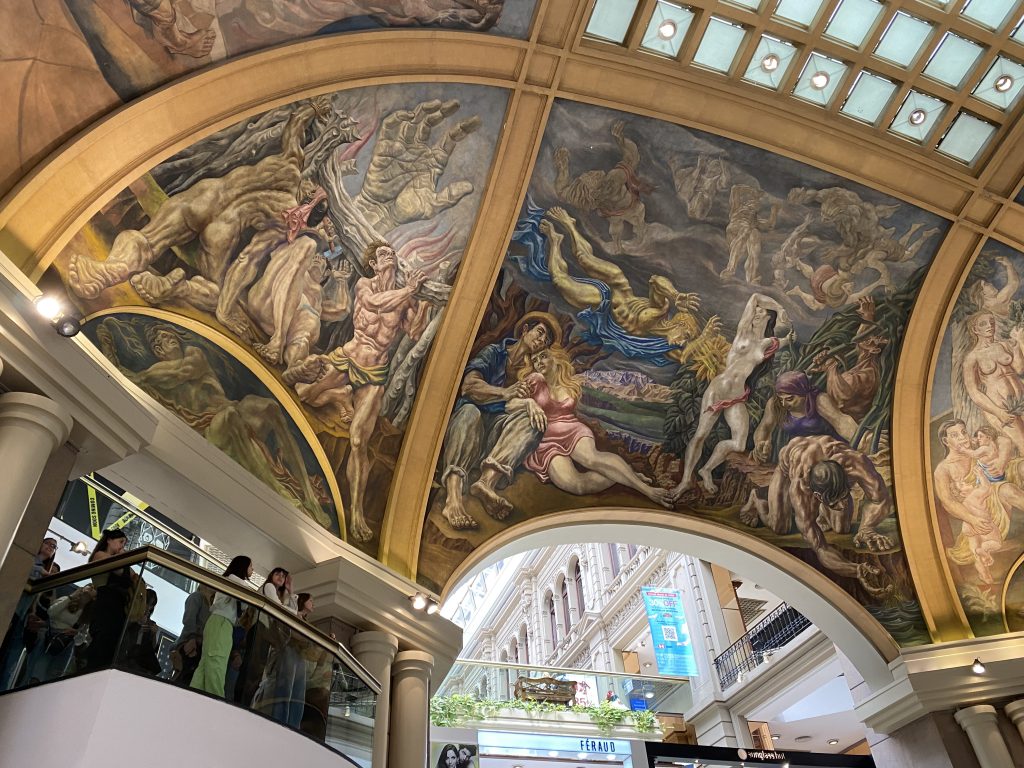 The main reason I included Argentina in my trip to South America was to see the Iguazu Falls, and it remained the highlight of my trip to both Argentina and  Brazil.

I enjoyed my short stay in Buenos Aires particularly all the things the city is famous for. I must admit that I over did the steak a little.   I enjoyed the Argentinean steak so much that I ate it practically every day for either lunch or dinner!  The local Parrillas, steakhouses which is the classic eatery, were not difficult to find. There was a Parrilla on every street.  Unfortunately, I did not take a good photo. I was too excited to tuck in and forgot to take photos and by the time I remembered,  I had almost finished the delicious steak.  I chose the Bife de Chorizo (sirloin steak in English)  every time. It was the king of meat cuts in Buenos Aires. I must say that I found the Bife de Chorizo as good as the famous Bistecca all Florentina, T-bone steak, that I ate in Florence in Italy.

One of the challenges I faced in Buenos Aires, like in any non- English speaking countries that I have visited, is the language barrier. Spanish is the official language and very few people spoke English even in the tourist places. I resorted to Google translate on many occasions which was quite frustrating for everyone, but I got by.

I would have liked to have visited Teatro Colon, an opera house acclaimed for its architecture and acoustics, or the Recoleta- an unusual cemetery which contains graves of famous people treated as a museum and a tourist attraction, or the El Ateneo Grand Splendid bookstore that is reputed to be the second best bookstore in the world according to a national newspaper in the UK.

Is it worth visiting Buenos Aires? Some people will say yes . For me, while I enjoyed my stay in Buenos Aires, I probably won’t chose to visit Argentina as a holiday destination per say. It is a very long way from the U.K – an eleven hour non-stop flight to Buenos Aires. The few days I spent in Buenos Aires was just right for me as I had combined the trip with visiting the neighbouring country, Brazil.