On the move again… at last!

Herne Bay is a quintessential British seaside town in Kent, where you can eat traditional fish and chips. It is close to Canterbury and Whitstable so you can visit it on a day’s trip if time is a constraint.

When I included Herne Bay on our list of places to visit, I had made a long list of things to do and see. But alas, it was not to be.

Immediately upon arrival, it felt like we were pulled by some imaginary magnet towards the amusement arcade. There are a few of these amusement arcades, next to one another that seemed like one seamless arcade.

These amusement arcades are packed full of jackpot machines, slot machines with 2p’s and 10’s pushers and stacked full of prizes that you are unlikely to win or ever want. But that did not deter us from having a go!

We quickly changed our monies into the required two pence or ten pence coins and picked up the plastic containers that were strategically placed near the money changing machines.   We were ready for business! We were like kids  who had been let loose in a chocolate factory for the first time. And we began playing, everyone jostling for the ‘best’ slot machine that appeared ready to release the jackpot. Although it was apparent that one cannot win, we were contended that it would keep us amused and entertained, which it did.  Hence several photos of the slot machines and any machine that we felt would release its jackpot to us by merely playing our two pence or ten pence.

Needless to say that we won some and lost some but mostly lost our few pounds, a total of three pounds each! It was a lot of coins considering they were in two pences!

For some of us, being in the amusement arcade and playing the 2p’s slot machines brought up pleasant childhood memories of holiday by the seaside.

If you are after an old fashioned , family fun filled day out, head to Herne Bay.

Apart from the amusement arcade, there is also crazy mini golf, a small pebbles and sand beach that will keep children occupied. 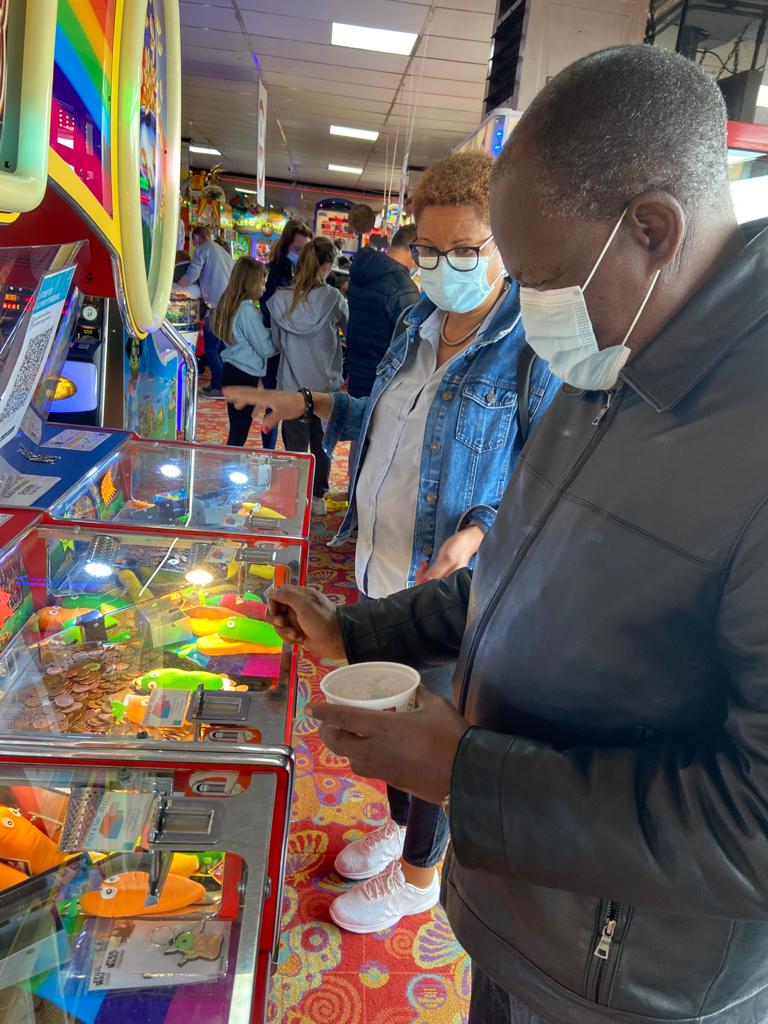 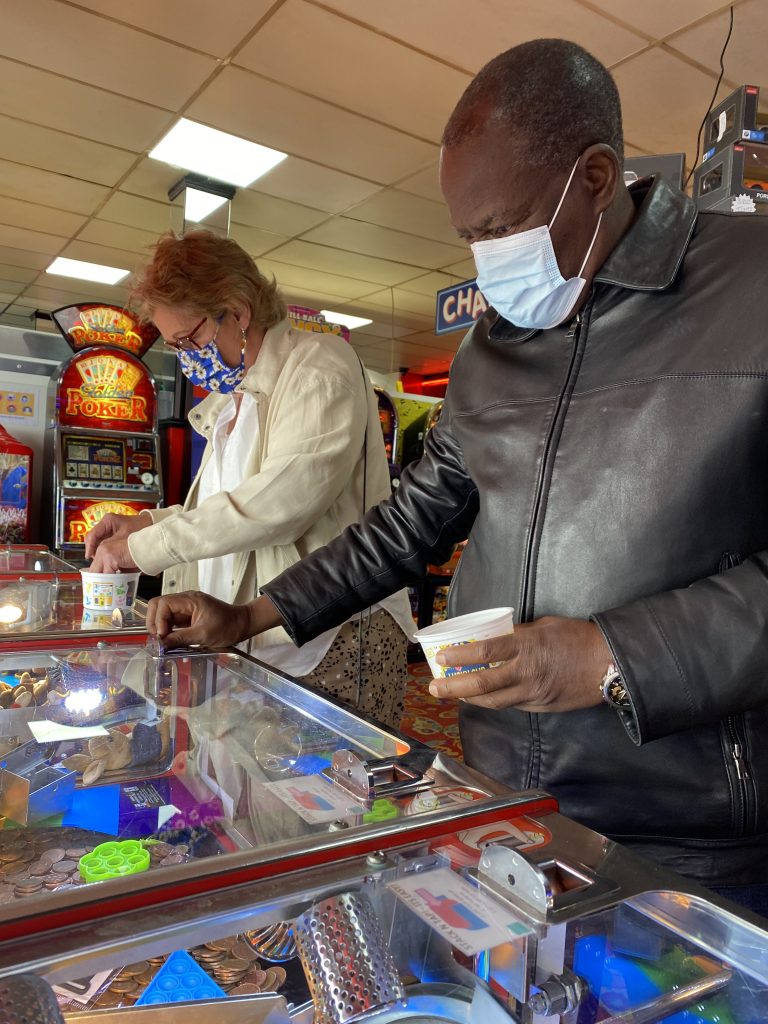 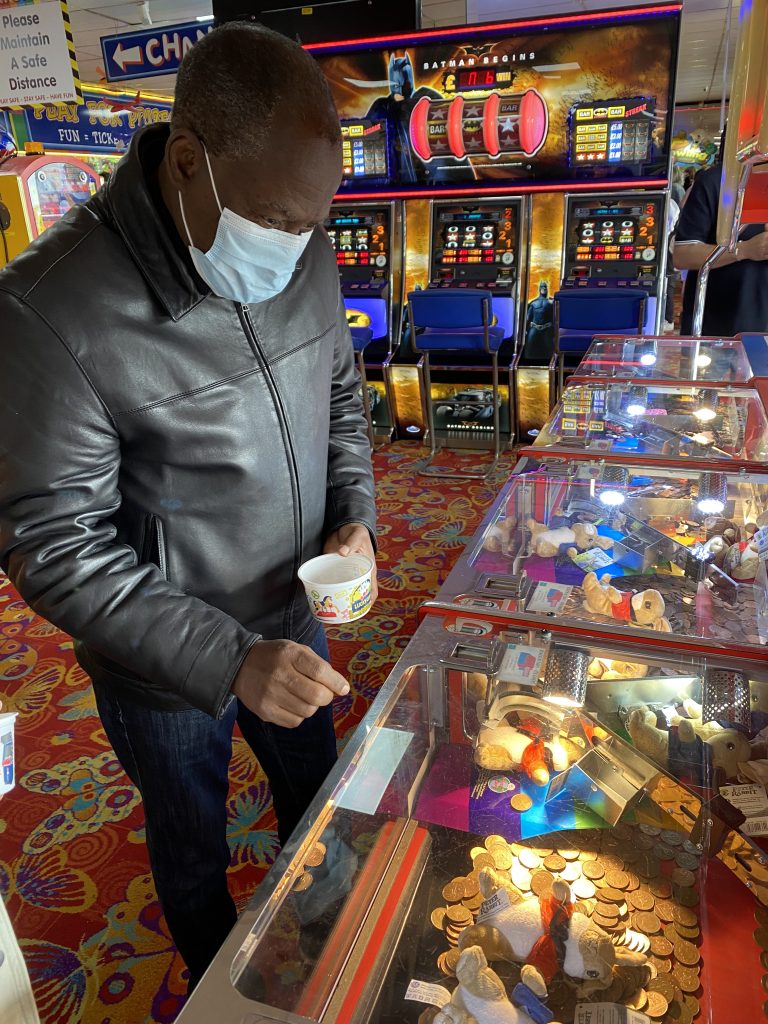 Every town and city I visit seem to have a clock tower. Herne Bay is no exception.  The Grade II listed clock tower on the sea front is a historical landmark. It is one of the earliest purposed built free standing clock towers in UK, built in 1837.

As we visited soon after the country was opening up after the pandemic, there was no activity on Herne Bay Victorian bandstand and seafront gardens. I imagined it would have been a lively spot with music, entertainment and  fun on the pier.

The pier in Herne Bay was the second  longest pier in UK. It’s centre collapsed in 1978 following a severe storm damage. It has been refurbished and made safe but not as long as it used to be. It was very quiet at the time of our visit as the country was just waking up from its covid slumber!

I was fascinated by the bronze sculpture of Amy Johnson, dressed in flying clothes, looking to the sky.  She was an English Aviator and the sculpture was to honour her. Unfortunately, I did not take any photos.

You cannot visit a English seaside town without eating the  traditional fish and chips!  We naturally sampled the local fish and chips. to round off our day trip, followed by a glass of beer.

Have you got a favourite fish and chips place on the coast? Let me know.